Zombies won't spawn at night until you place the gold stash. It goes on forever after tier 6 [orange zombies] at type 10, at wave 141.
Having more players in your party increases the number of towers and zombies.

These are the enemies that spawn around the red things scattered around the map. These are popularly known as demons because of the way they look. They are more annoying than they are strong. If you are just starting out, do not attempt to kill them, otherwise they will kill you for sure.

If the monsters are hit by a player or a defense, they will attack whatever hit them. However it is only if you attack them. If you just pass around them or move them by accident, they don't care. Three monsters will spawn a red rock. When one dies, another one will simply respawn. Also if they get too far from their home rock in pursuit of you, they will return. These more or less get in the way; they aren't a huge threat at all.

killing monsters are a great way of leveling up your C.A.R.L, especially is you are in a high level base and have a low level pet.

The bosses look like these monsters, just bigger, deal more damage, have more hit points, and will attack you and your base.

Players and their bases[]

Other players in your server might cause significant annoyances and they are the only PvP action you'll ever get in this game.

Bases are the most annoying things just get an emerald spear and try to kill a wood base you will fail especially because bases hit through shield. Best time to destroy a base is when they don’t have any defenses at all

Players might attack your base, spam your chat, or kill you. While that might be symptoms of No Life Disease, players are easy to counter.

Symptoms of No Life Disease 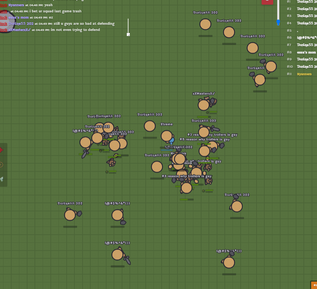